Main Street in Girard isn’t just for businesses and storefronts, there are many residential properties lining Main Street and David Tavernese’s home at 235 Main Street E is a beautiful example of some of the astounding historic residential architecture that Girard offers. David moved to Girard in 1994, when he was the President of Gary Miller Auto Sales in Girard. Shareholders at the business thought it would be best if the president lived where the company was, and so Tavernese made the move out to Girard. He knew he wanted to take on an older home, so, in a rather unorthodox but effective move, he walked up and down Main Street knocking on doors to see if anyone was interested in selling their home. He hit on one house, at 235 Main Street East, whose occupants originally said no, but then called him a couple of days later with an offer.  And that home has been David’s pride and joy ever since.

David reports that the deed of the house states that the home was built in 1846, making it a very early example of Girard’s architectural history. Although tax records state that the home was built in 1900, Tavernese believes that the Queen Anne elements of the home that make it stand out so much now, were added at a later date, likely the turn of the 20th century. The home is part of the Girard Historic District. Tavernese was also able to verify that for a few years, his home was once used as a police barracks for Girard, housing up to 4 state police officers at one time. 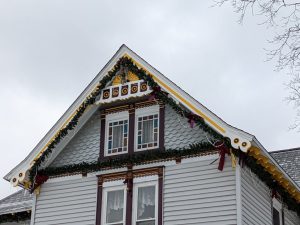 The appearance of the Tavernese home does indicate that it was once a much simpler home that was added onto, in terms of square footage and style as time wore on. The millwork in the roof gable, the decorative spindles on the standout semi-wrap around porch, the elaborate millwork around the exterior of the windows, and the multi-paned original windows on the third floor are all very typical of a Queen Anne style of architecture. Those are the elements that made Tavernese so excited to take on the old home, and also those he was most anxious to make sure were preserved. “I had to restore the front porch, the railings and the skirting that went around the house, which is a pretty unusual bullseye pattern and a lot of gingerbread at the peak. My wife gets all the credit for the paintwork and did a marvelous job.”

Girard Borough’s Facade Improvement Grant Program is funded through a Mission Main Street Grant from ECGRA. Property and business owners within the designated downtown boundary (Main Street from the east borough line to Old Ridge Rd and Rice Avenue from Main Street to Vine Street) are eligible to apply. Grant funding can cover up to 50% of costs for approved exterior improvements, which means that eligible property owners end up paying half of the total cost of their exterior projects and funding can be matched from as little as $200 all the way up to $10,000. 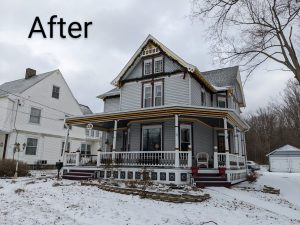 Tavernese was very thankful for the Facade Improvement program as it allowed him to fully complete the job, which, he noted, he would have done more piecemeal over the years if not for the grant program. When it came time to do the work, David rented a large boom lift in order to reach the most difficult areas to paint, and his wife was really able to get to all the details in the woodwork, and paint them in a way to really make them pop. “I wouldn’t have done it without the grant funding, because it was pretty expensive. I ended up using the maximum amount available. I probably would have eventually done the work, but I wouldn’t have rented the equipment to do the peak and this way I was able to afford to get everything done. The grant was really a godsend because my wife and I seemed to talk every year about getting all the painting done on the house so when they came up with that program, it fit right in for what we needed.”

David would love for more homeowners to know about the grant programs availability for exterior home improvement projects. While it does seem that mostly businesses on Main Street end up taking advantage of the grant program, it is available to anyone on Main Street. “On the side of the street that we live on, there are more residents than businesses.” Beautifying and improving Girard’s Main Street means that everyone who lives or works on Main Street (or surrounding it) can take advantage of the program to help make Main Street as beautiful as possible, and that work can improve the quality of life and the quantity of business for everyone.