The history of 18 Main Street East was very important to Craig Kovaly when, 15 years ago, he and his wife, Jen, were looking to establish Jen’s Hair Salon business in Girard. Jen had a successful following and clientele in town and wanted to stay nearby but was eager to have a salon to call her own. When the storefront at 18 Main St East became available, they jumped at the opportunity. When they purchased the property, the building was being used as an antique store and was in rough shape. The interior needed to be modernized and brought up to date: they replaced all the electrical and plumbing, and made sure the building was up to date on all fire codes, replaced insulation and even did some structural work. And while the interior is now a modern, functional space, Craig knew he wanted to keep the look of the exterior historic: “This was important to me, to maintain the historic look. A modern building or a new development wouldn’t fit with what is going on in Girard.”

One of the historic photos of the property at 18 Main St E, close to the turn of the 20th Century, when the business was E.L. Hanson’s Harness and Carriages.

Honoring the history of the building is clearly important to the Kovaly family, as right upon entering Maximum Hair Salon, you can see historic photos of the building displayed on the walls, the silver of the antique photographs illuminated by the flood of sunlight entering through the newly installed storefront windows, which mimic the original windows of the historic building. The history of 18 Main Street East is actually tied to the history of the building at 138 Main Street West (Eliza Wolfe’s Pottery and Main Street Art). That building was constructed in 1861 and held a leather goods and saddlery shop in Girard owned by John Simmons. The original owner of 18 Main St E, the Kovaly’s building, was Emmet L. Hanson, who took over the leather goods business from Simmons after his death. 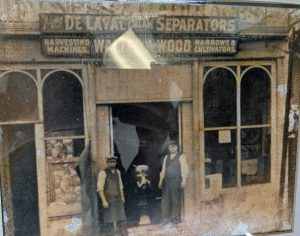 Another historic photo displayed in the salon of EL Hanson’s shop. You can notice that the updated sign of selling cream separators, harvesting machines, etc. hangs over the old harness and carriage sign. The Hanson’s business changed with the times.

Emmet Hanson was born in Albion in 1868. His lineage goes back to some of the very earliest non-indigineous settlers of America: both his mother’s and father’s families can be traced back to New England settlements in the 1600s. His father, Sylvender Hanson, who served in the Civil War, was also a harness maker and carriage salesman in Edinboro, where Emmet grew up. His wife, Dima Marsh-Hanson, was from a family of successful farmers in Waterford. Emmet learned leatherwork from his father and then worked for the Simmons Saddlery in Girard, eventually taking over that business. As the times changed, so did Emmet’s business and it morphed from leather harnesses, carriages, and whips to sales of farm equipment and tractors after the use of automobiles became more widespread. The couple and their children lived in a home which would have been right across the street from the shop at (what was then) 21 Walnut Street. 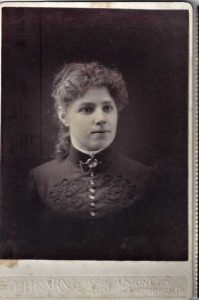 A historic photo of Dima Marsh-Hanson, the wife of EL Hanson, original owner of the storefront at 18 Main St E. (Source: Ancestry)

“It was important to me to keep the original look of the building, so when that grant came along and part of the requirements were to maintain the historic look of the building, that was perfect for me.” The grant to which Craig is referring is Girard’s Facade Improvement Grant Program facilitated by the Girard Borough for property owners on and around Main Street Girard. Girard Borough’s Facade Improvement Grant Program is funded through a Mission Main Street Grant from ECGRA. Property and business owners within the designated downtown boundary (Main Street from the east borough line to Old Ridge Rd and Rice Avenue from Main Street to Vine Street) are eligible to apply. Grant funding can cover up to 50% of costs for approved exterior improvements, which means that eligible property owners end up paying half of the total cost of their exterior projects and funding can be matched from as little as $200 all the way up to $10,000. 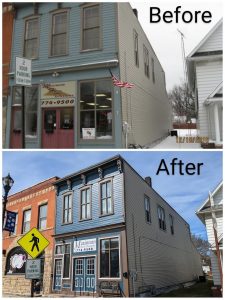 And the Kovaly’s took full advantage of the grant money available, utilizing the maximum amount for their Maximum Salon. Craig reflects: “The upgrade of the windows, doors and all the siding out front, it was all something that I wanted to do, something that needed to be done, but I couldn’t justify the expense without having that grant money. We took full advantage of it.” Not only did the Kovaly’s reface the entire storefront, replacing the massive windows, doors, siding, steps, decking as well as paint and trim work, they were able to do it all under the umbrella of the grant program which means they were only required to pay half of the cost of those improvements. With all of the work the Kovaly family has done to the interior and exterior of the building at 18 Main St E, it should surely be standing tall for another 130 years. 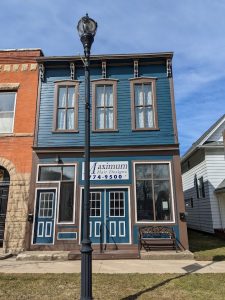