The Battles Bank building at 12 Main Street East in Girard is a landmark you can’t miss as you pass through town.  It was constructed around 1893 by local farmer, lawyer, and businessman Rush Battles, shortly after the neighboring library was built. Rush died in 1904, and his wife Charlotte and daughter Elizabeth, kept the bank running for decades, and did so famously, even through the Great Depression.  The construction of the bank was considered “impervious to robbers” and the building is as solid as they come, which is helpful for its longevity and for its future as a landmark property on Main Street.  The bank eventually closed in 1946, and the building was sold and became a jewelry store. It was in this building and at that jeweler that Jon and Gina Welsh purchased their engagement rings.  And now, many years later, they have come full circle, back to the building where it all began, to begin their new business: Full Circle Winery.

The Welshes purchased the historic and infamous Battles Bank Building in 2019, and started to work on the building shortly thereafter to eventually transform it into their dream winery.  Jon makes his wine in the basement, while the main floor is table seating with a bar, set amidst the more recognizable bank characteristics, like the vault, teller station, and wrought iron window bars, that were all retained over the years. 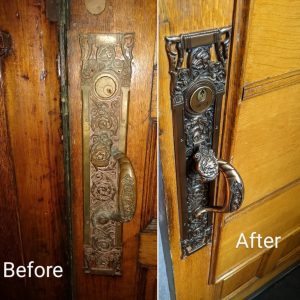 While the building itself is rock solid, when anyone takes on a building that’s over a century old, the list of projects is usually pretty long.  And to then convert that property into a specific business takes a special vision and plan for completing those projects.  And thanks to Girard Borough’s participation in the Mission Main Street Grant Program funded by the Erie County Gaming Revenue Authority, the Welshes’  list was made a little shorter and saved them some much needed cash for other projects.

When the Welsh family took ownership of the building, one of their biggest safety concerns was the 70 year old arched plate glass window that spans the majority of the facade of the building.  The window was struck, at some point in its history, with multiple BB shots, bringing its structural integrity into question. “The grant program has been a real lifesaver. When we looked at how much money the window was going to cost, it was going to be a significant investment, and the grant program was just awesome.  It saved us half the cost on this window,” said Jon.

The grant program to which Jon is referring is the Facade Improvement Grant Program, provided by Girard Borough and funded with the Mission Main Street Grant from ECGRA, to property owners within the designated downtown boundary (Main Street from the east borough line to Old Ridge Rd and Rice Avenue from Main Street to Vine Street).  These grants are provided for approved exterior improvements and are funded by the Borough at a 50% match basis.  This means that eligible property owners end up paying half of the total cost of their exterior projects and funding can be matched from as little as $200 all the way up to $10,000. 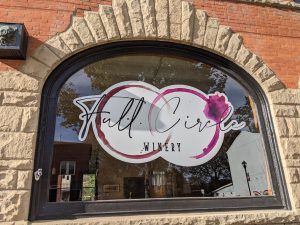 The window was one major project that, when it was completed, allowed Gina and Jon to breathe a huge sigh of relief, but it wasn’t the only project that qualified them for Mission Main Street funding.  They also had the exterior of the building power washed, all the trim repainted, and they had the intricate, antique, original door plate and handle restored.  The total of all their exterior projects was around $3,000, which meant that the Welsh family only paid $1,500 out of pocket for all of that work.  They are now looking forward to the next round of Facade Improvement Grants to apply for funding to complete some brick repointing work that will help, not only with the structure of the building, but also the aesthetics of the facade.

And the application process was simple.  “The paperwork was very easy,” said Gina.  They had to record estimates from all of the contractors for prior approval, submit “before” pictures of the projects, and fill out the necessary forms (which are available here).  But otherwise, the process, which can sound intimidating at first, was undaunting.

With those exterior projects off the books, and after completing some interior improvements like hardwood floor refinishing, painting, and the basement-turned-winemaking-room conversion project, the Welshes are excited to get their new business off on the right foot.  The official Opening Day of Full Circle Winery was Thursday, October 28th, and they’re hoping everyone near and far comes to visit, to taste their wine, and to admire their historic, restored building.  Gina says that, although she knew these projects needed to get done, it really was the Facade Improvement Grant Program that pushed them in the direction of completion when they did.  It would have taken longer for them to get things ready for the public if it hadn’t been for this grant program.

Gina and Jon also believe it’s important to be a part of this small historic town’s Main Street.  Gina says that the foot traffic that goes by their newly replaced window is astounding:  “It’s a great little town and it’s extremely important that we’re here in the community of Girard.  We’re so excited to be here.”